100%   Blacklist  1y ago ago
Constantly Changes Name To Something Gross Second Account - Because they won't stop posting about really disgusting things about poop on threads they weren't even suppose to be in. It's no wonder they have no roleplay partners. Or friends. Or a life. Probably no family too.
Funnies

0%   Movie/TV Show Quotes  2y ago ago
Thor: The Dark World
Loki: I think you missed a column. Thor: Shut up!

Legends of Tomorrow
Nate: Quiet. The marshmallows are talking.

Lucifer: See! Didn't have to chase him at all. He got 'tired'. Chloe: Ugh. Lucifer: Oh come on. I thought that was one of my better puns.

Chloe Decker: I need your help like I need a third boob. Wait. Don’t say a word. Knew it was a mistake the minute it came out of my mouth.

Lucifer: Only for torture, and usually out of tune. Lately, we’ve been playing music by this chap named Bieber. Gosh, you should hear the screams.

Lucifer: No offense, brother, but on the list of things I’d like to wake up to, your face falls somewhere after a horse’s head and Coldplay tickets.

Lucifer: I know that look. Either there are new sandwiches in the vending machine, or you have a lead.

Chloe Decker: It’s really not a good day for… your… Luciferness.

Chloe Decker: Do not touch the charred crotch. Is a sentence I never thought I’d say out loud.

Iron Man 2
Nick Fury: Sir, I'm gonna have to ask you to exit the donut.

Iron Man 3
J.A.R.V.I.S.: It's totally fine sir. I seem to do quite well for a stretch and at the end of the sentence I say the wrong cranberry.

Arthur: Show off. I could have just peed on it.

The Amazing Spider-Man 2
Spider-Man: Ugh. Shake it off. It's just your bones. And your muscles. And your organs.

Luke Cage
Luke: I'm not in the market for a, uh, side-kick.
Misty: Who said you're not my side-kick?
Luke: Really? It's my show.

0%   Cosplays  3y ago ago
Cosplays In The Works
Tokyo Ghoul cosplay of some sort - Either it's a genderbent Ken Kaneki or a sort of OC style thing using Kaneki's mask. I'm not sure yet. Depends on if I keep the eyepatch on the mask or not.

Anime Characters To Cosplay
Jotaro Kujo - Stardust Crusaders and Diamond Is Unbreakable variations. Screw it. I want all his outfits.
Guts - Berserker armor, Dragon Slayer included
Gyro Zeppeli
DIO Brando - I have ideas I want to do with this that will either get laughs or get me slapped.
Joseph Joestar - Young version. I have clackers to go with(which is what convinced me to do this) and something else to go with that might get me slapped.

*Cesar Zeppeli - Need to find a bubble blowing machine. Or just carry around a bottle of bubbles. Because bubbles.
*Noriyaki Kakyoin - Cherries. That is all.
*Jouske Higashikata - I'm gonna look funny with a pompadour.
* Giorno Giovanna - I'm gonna look even funnier with gold tortellinis though.
* Jolyne Cujoh
* Star Platinum - A gag version. It involves a frying pan.

So much JoJo.
Things

0%   Sharable Internet Stuff  2y ago ago
I have things to share.
Mostly animal stuff and whatnot.

100%   Reptile Stuff  1y ago ago
It is now official. Facebook page is done and live. This is the start of a long and adventurous reptile filled life.


Events
NARBC Arlington- The February show has been moved to April. Watching to see what happens between now and then.

Breeding Projects
3 albino projects and 2 pied projects are in motion.

Status: ~I am working on replies. Just moving slow as molasses that's in the freezer. Still adjusting to new medication as well.~

.:{Snakes make me happy. My snake family continues to grow.}:.

.:{
I always make it out on the other side even when it seems impossible.
}:. 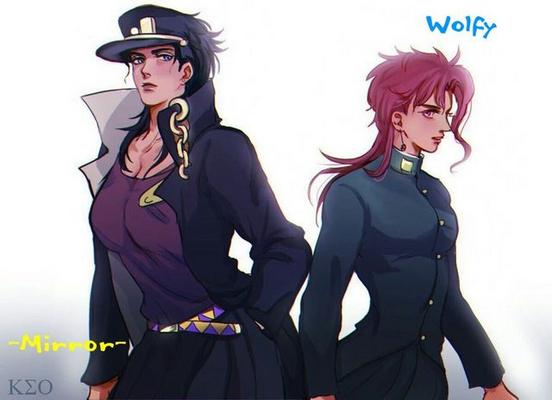