Backup thread
So, I don't have a full fledged idea for an RP, but I have this character I came up with and would really like to use him;

This character is a sort of creature- and entity I guess you could say that will imprint onto a human when they are very young. This entity will live within the consciousness of a child, much like the child does within it's mothers womb, and it will grow on fear from nightmares it will cause until one day it can speak- whispering to the child from within- Most will call them intrusive thoughts.


Once the entity begins to speak, normally the child 'infected' will begin to act out, doing and saying things they shouldn't. Having their host listen to their whispers allow the entity to become stronger, and if it continues by teenage years the child may even be able to physically see the entity and even physically interact with it as their bond grows. The entities goal is to eventually have the host follow their every order, almost as if the entity has taken over the controls of the humans body- it's more so mind control.

If the host begins to fight back against the entity it will not add any extra effort in tryin to make the human listen, they will simply kill whoever it is and move onto another human and hope for a better outcome. Much the same, if their host dies the entity will have to find another child to start over.


You begin to have nightmares of a dark creature that resembles a wolf, but everything about it is not right. The eyes are too close, the face is too flat- it's like a creature out of hell- the nightmares never have anything but this creature, seemingly floating before you; 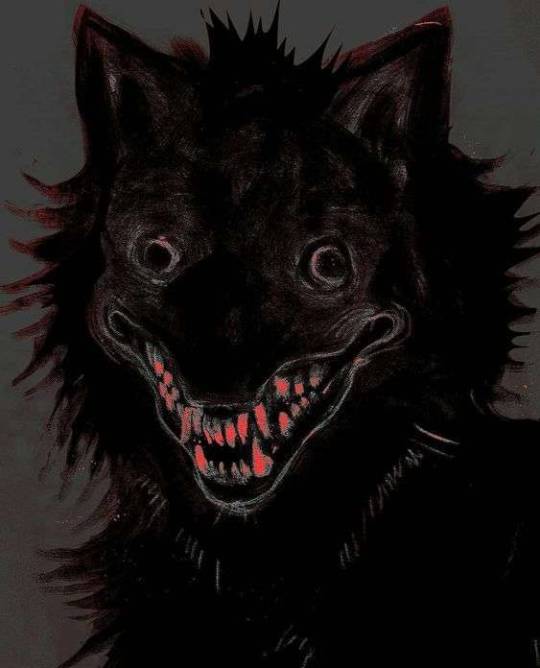 "
Don't worry child, I will never hurt you. I will always keep you safe. I promise.
"
Horror
Fantasy
Sci-Fi
Thriller
Supernatural
Video Chat Kumospace [Everyone] Gather.town [Everyone]

Neutaq-   Intrusive   204d ago
Husky King 👑
Open to any idea changes or additions you may have! Message me and we can talk!

Gazing around within the darkness he lived in, the Intruder, as many humans before had called his kind, waited for the mind of the human he occupied to sleep. Tonight was a special night for them both, the Intruder was sure he was strong enough that after tonight he could show himself outside of nightmares, he could step foot on the earth- it had been 17 years living inside left with nothing but whispers and these dreams.

A sensation fired off and that told the Intruder that his host was finally asleep. “_____.” he whispered, “Come, find my voice child. I have wonderful news.” He whispered; voice coated in excitement.  “You should be proud of yourself, ____. That really isn’t an easy thing to do– you are special. This is why I chose you.” The Intruder spoke softly and almost lovingly, as a proud parent would to their child. Speaking only truth, he was proud of the human for fighting back for so long, the last host he was with only lasted until the age of 13 before they really started to cause some trouble. “But, you can’t fight me off any longer I am afraid. I’m coming for you tomorrow ____.” He said, the smile could be heard as he spoke the last sentence. “The good news is I won’t look the same- I know how much you’ve always disliked looking at me..” he said with a playful laugh. He knew his current appearance was not a pretty sight, but that was precisely the point- he needed some fear first before he could move onto the fun part. “I will let you sleep now, it’s a big day tomorrow….. Keep your eyes peeled.” He said as he let his consciousness fade off to any other dream. “I’ll see you tomorrow, ____.” he whispered.