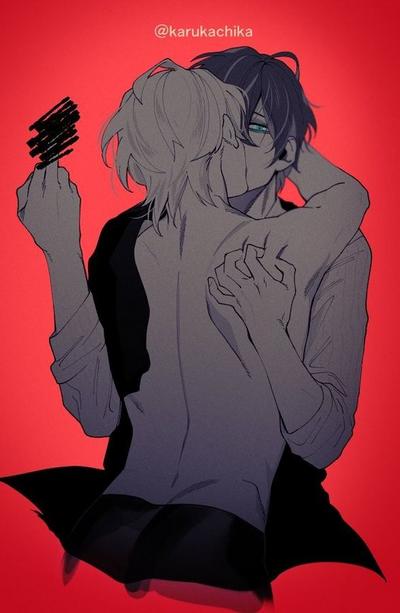 Jade was very smart young man. He studied hard, he made it through high school and even college. He got a great job as a scientist. He loved working with animals. Humans on the other hand. They disgusted him. Except for one sickly boy. The boy was dying the boy knew he was dying. He didn't really care that Jade tested on him. The boy hope that maybe he could cure him but he boy didn't get his hopes up.

Jade eventually found a cure for the boy sickness. He mutated the boy D.N.A... With the boy's D.N.A. mutated he became cat like. The boy seem to stabilized he was able to live like a normal teenage. The boy was great-full to Jade so he often stay with him. He help him the best he could with his experiments.

Things seem to be going peaceful until. One night the lab was broken into by the police. Apparently what Jade had done was against the law they consider him a dangerous criminal. Jade and the young boy try to hide they almost got away except for a rookie that seen them. He didn't ask any question he shot at them. Jade had a plan to get away but with the cops shooting at them things got harder. He did his best to get them away but sadly the young boy got hit boy by two bullets.

Jade try his hardest to save the boy but he die. Jade was able to get way but on the inside he felt nothing but pain. Since they day he hated humans especially cops.

Jade was never the same. The feeling he had for the boy were special now that sweet boy was gone. From that night forward Jade became heartless and plan to get revenge for the boy...He planned to kill the rookie cop that shot the boy.

Okay that is what I have so far for the story line.
There two options because there will be romance in the story but not with out pain!

Keep in mind that Jade is in mid-twenties so your character need to be at least 18.


Anime picture only !
This rp is MxM
This is going to be a 1x1 (adding side characters here and there is fine!)

Need someone who can write 1000+ characters.

CatsCradle   ❀   251d ago
Cat Lover ♥
[center [#3b1256 Tragedy is what seemed to follow this man. Jade always seemed to have a rough life even when things were going great. Finally they were great, until now... He was gone. The only one in the whole world who didn't think of him as a monster. Just gone in an instant. A blink of the eye really.


Jade was lucky enough to get away with his life. If it wasn't for him he honestly wouldn't of. That  boy he cherished so much was gone it was because of him.


Itami sighed softly as he closed his eyes. He had just made it to his hideout deep in the woods. His body was bloody and bruised. He had a bullet deep in his arm that he was going to have to get out.


He pulled his large knife from his pocket. He used the tip of the blade to pry out the bullet. He winced in pain. He wrapped the wound after press on with a damp cloth.


He would bathe later but first some rest was needed. Itami sighed softly as he closed his sapphire colored eyes. He made it to the small bed that was in the next room. He laid down and sighed softly. Everything hurt. His heart, his wounds all of it.


Itami eventually fell asleep. Soon he would get his vengeance. Those who kill his precious experiment. His lover. They would soon be dead. He would make sure they suffered.

-Rabbit   .Subject.   200d ago
[center Through the woods. Blocking his face with his hands so that he didn't get hit by any of the stray branches the boy ran. He had to get away. Yes. If he didn't... Oh... If he didn't then he was bound to hurt more than just himself. He had to find somewhere safe. Somewhere he could easily just take his own life. He was useless. He was no help to his beloved brother. He was only in the way. He was only causing him more issues. If he was gone than he wouldn't have to worry anymore.


He was eighteen years old and had lived with his brother for a rather long time. He hadn't been treated well by his family. Abused. His brother loved him so much, but he knew that he was causing a lot of havoc in his life. He was trying to do his best to help him.


Running was getting painful. His breathing was ragged. He could taste blood in his throat. He wasn't paying attention and soon he tripped over something, and he fell hard onto the ground.


A yelp escaped passed his lips. He laid there for a long time. He had fallen on his arm wrong, and he wasn't sure if it was broken or sprained. Tears threatened to spill over, and he gritted his teeth. No. He didn't want to cry. He tried to get up and fell.


He had wanted to kill himself, but not this way. He had at least hoped that he would have gotten to die using his own methods no laying on the ground possibly with a broken arm. Oh how stupid.

CatsCradle   ❀   43d ago
Cat Lover ♥
[center Jade sapphire colored eyes snapped open as he hear the sound of something falling from a great distance. It landed with a loud thud. The sound didn't come to far from his hide. He snarl as he stagger to his feet. Everything told him not to go out there. Who or what could of caused that noise. What were they doing out here?


[#3b1256 "Damn it."] he mutter as he open the door. He step outside it was getting fairly dark out. Luckily for his he could see well in the dark. He continued searching around until he finally found the cause of the noise.


[#3b1256 "What are you doing here?"] he said dryly as he pull the brat to his feet. Jade sapphire color eyes almost seem like glowing gem in the dual light.  [#3b1256 "It dangerous out here... soon it will be night fall..."] he said as he pull the helpless boy into his hide out.

He didn't know why he bother to help the boy. Nor did he know what he was going to do with him. If he tried to run he probably just kill him, but being in the weak state he was in that would be difficult.


Jade put the male arm in sling after forcing to him to sit down in a chair.  [#3b1256 "Tell me...what were you doing out here?"] he said as he looked at the man. A nervous pit formed in his stomach. He was sure the boy wasn't a cop.