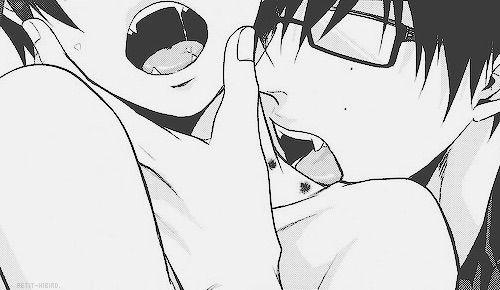 Animalistic   Kiwra   223d ago
Big Bad Wolf
[center [font "century gothic" Kirwa Ketsueki is a very popular young man. People mostly notice him for his family money. It sickens him, people never seem to notice how good he was at math and science. All they cared about was his parents wealth. That's how it was most of his life. It was rather difficult to making friends. Kiwra could careless, about having friends. He rather spend most his time in his lab studying.

Kirwa parents made it perfectly clear that if he wanted to inherit his father company he had to attend to all his classes and learn how to be sociable. That sicken Kirwa, he lived on his own in a mansion yet his parents were still treating him like a child. He did as he told he showed up to all his classes as he was told. He hated dealing with people. People disgusted him they were all fake. People who try to get close too were only after one thing that was money.

No ever seem to fall for his looks. Maybe it was because he had such a horrible personality, maybe that was why they never bother to look at him twice. Except for this one boy. This one boy was different from the rest. He was short and cute, he went by the name Eriol. He seem to be the only person he could actually tolerate. The rest of them were all just a bunch of animals.

Kirwa was a very difficult man to get along with. If things didn't go his way things would get messy. Kirwa mainly hard a hard time working on group projects unless Eriol was around. He seem to make things a little easier. There was one thing that Kirwa didn't like about Eriol. That was his boyfriend. His boyfriend was the worst. He was annoying, always seem to have a cocky attitude. Kirwa knew that Eriol's boyfriend was just playing with him as if he was a doll. No matter how many times Kirwa told Eriol, he wouldn't listen.

It was almost like a game that his boyfriend was playing Kirwa was just waiting to catch him. When he did, he would make that bastard pay for playing with Eriol. Kirwa love to study the human brain he was just desperately waiting for the day Eriol came to him crying. Then he would make his move. He would take care of Eriol's boyfriend once and for all. Oh the idea of cutting the man's skull open brought a smile to his face. Surely he brain would be fun to study?

Animalistic   Eriol   223d ago
Big Bad Wolf
[center [Font "century gothic" Eriol smile faintly as he walked to class alone. He lived on campus it really didn't take him long to get to his classes. He was always happy to see the dark hard male sitting alone in the corner. [#6339a2 "Good Morning Kirwa"] he said softly as he sat down next to the male. Surely Kirwa was going to noticed the red around his eyes. Kirwa wouldn't ask what was wrong. Kirwa always knew what the problem was.

It was normal for people too fight with their significant other right? It seemed to be happening a lot lately. It was because ___ didn't get a long with Kirwa. Kirwa had no interested in a lover, Eriol had told that to ___ many times. It didn't seem to matter, ___ alway got jealous and annoyed when every Eriol brought Kirwa. Eriol and Kirwa had been friends a lot longer so it was hard to stay away despite his boyfriends constant threatening to end the relationship.

Thing would be okay the end of the day. Normally around noon or a little after Eriol would get a text on his phone from _____ The two would make up and spend the night together. It seem to happen every time they fought.

Fantasme   .Burn.   222d ago
[center So he wasn't probably the best boyfriend in the world... Okay so he wasn't. There was no probably to it. He got angry easily and he would get rather snippy. Jealousy was most likely the issue, but hell most people had jealousy problems. It wasn't just him.


It was always like it was the end of the world though. He couldn't help it. He was very sure that Eriol's friend was trying to take him away. There was just something he didn't feel very comfortable with when that man was around. It was like his boyfriend was prey. At least that's how he felt.


He hadn't texted him yet to apologize. He normally would, but he just hadn't gotten to it quite yet. He was thinking to himself as he drove towards work. He had been working since he could get a job. Probably even longer than that, but no one would know.


Most of the time Mallory kept to himself because it was just better that way. No one needed in on his life. He liked to keep most people at a distance. Once he parked the car, he reached over to the passenger seat and picked up his phone.


It was probably best to apologize for being an ass. Eriol stayed no matter how angry he got. He had even threatened to end their relationship because he didn't like Kirwa that much. Supposedly he was in the wrong for that.


At least that's what a lot of idiots on the internet seemed to believe. Fuck them...


Yet here he was going to apologize and try and make things better. He always was. At least he felt like he always was. Why couldn't Eriol just give in on this one thing? Then again...


He leaned back in his seat and closed his eyes. He shouldn't be telling him who he can and can't talk to. He is supposed to trust him.


Those odd eyes suddenly opened. He did trust Eriol... It was Kirwa he just didn't trust. The man that looked at him like he was scum and always had. He hadn't even done anything wrong. It was all because he was dating Eriol and he knew that. Kirwa wanted Eriol for himself.


He quickly shook his head. He was getting himself worked up again. He unlocked his phone screen and let his touched the message icon.


There was no point in making himself angry. He needed to apologize and right himself again. At some point these apologies would start to mean nothing. Because nothing would ever get better, because he was never going to change.


He sighed. He couldn't think like that. He had to focus. He had to do something. This relationship couldn't be doomed to fail. He loved Eriol too much to let this all fall down around him. He wasn't going to burn this bridge. This was the only person he had. He didn't have anyone else.


He was alone. He began typing wondering if he would regret what he was about to send.


[i [+crimson Hey... I know this is probably getting out of hand. It has been repeated over and over so many times. I don't know how many times I've actually apologized to you. Too many to count, I am sure. Yet here I am again. I know I need to change. I know that I am the problem. For that I am sorry. All I can ask is for some patience. I will try to stop getting angry and jealous about your friend. I know that is all he is to you. I will try to do better. If you can forgive me... Maybe we can talk about it tonight.]]


Well hopefully that was different than what he normally would put into a message. Hopefully it would at least come across as he was trying. He was trying... Well at least he was going to start trying now.


It wasn't like he had fed this to Eriol before. Usually, they would fight, and he would just apologize. Now he was offering to try and change himself. It was a hard road though, wasn't it? To change something so ingrained into him. He closed his eyes.


Okay things were going to be alright. He hit send on his phone and then locked the screen and got out of the car. After work they would talk and maybe things could start getting better.


He didn't want to start resenting one another. He wanted so badly to make this work. Though most people always thought he was just using Eriol. What could he possibly be using him for?]

Animalistic   Kiwra   222d ago
Big Bad Wolf
Kirwa sighed softly as he watched  Eriol. He knew the couple had gotten into fight considering how red his eyes were. He didn't have to ask, it seemed to happen almost every weekend.  [#d24337 "Morning"] he said as he looked at the slender male. He watched him take he seat beside him.


Kirwa put the book he was reading back into his bag. The teacher strutted into the room. It was long before that old woman started to ramble on about their class projects that were due at the end of the week. This history class was boring.


The only thing that seemed to give him a laugh was how stupid people were. How they mindlessly slaughter each other over land, wealth and food.

Animalistic   Eriol   222d ago
Big Bad Wolf
[center [font "century gothic" Eriol sighed softly as he picked up his phone to see the time. It was only 9:02 AM. There were still two hour and 58 minutes before noon. Noon couldn't come any faster. He wanted to see his empty screen light up with a text message from ♡Mallory♡ .


Mallory was the only one in his phone with hearts around the name.  [#6339a2 "How are you doing today Kiwra."] he said with a soft smile.


Surely a small converstation would distract him from his thoughts and the waiting. As time passed the his first class started and eventually end. Then after that it was science. Finally then lunch it felt like forever.


To his surprise he gotten a text from Mallory. He was surprise by what Mal had said. It had brought a small to his face.


[+Darkpurple [i "I would love it if we can talk later... Thank you...♡  ]] Eriol was struggling with what to say but he was happy that Mal had finally texted him. He couldn't wait for Mallory to be over tonight.


They were sure to bicker for a little bit after that they would cuddle and maybe have a make out session. The thought of that made Eriol heart race. A small blush appear on his face as he shook his head. He need to eat something quick and finish out his day.


He was off tonight , so he didn't have to worry about getting interrupted. He would get to spend the whole night with Mallory. Eriol smiled as he head to his next class, this was his favorite class. It was his art studies, they were currently sculpting.


Eriol had be working on his sculpture for about three days. He couldn't wait to see  what it turn into. After about two hour it was time to head back home.


Eriol walked with Kiwra to the ended the street. He waved goodgbye then headed straight home. He showered, then cleaned up his apartment. Soon Mallory would be over, he wanted everything to he spic and span.


Once he was done cleaning he sat down on the sofa, after lighting a rose scent candle. Now he waited he sat there in silence wait for the sound of jingling keys. The sound of the lock opening.