It’s been fifty-seven years since it started, and it happened so quickly…
The virus broke out on October 31st, 2010 in Atlanta, Georgia, on a sunny day. It spread from person to person through bite and just plain death, if you were dead within a week before the outbreak you were a zombie, and if you are still alive now… well, let’s just stay that you are in a world of a literal hell. 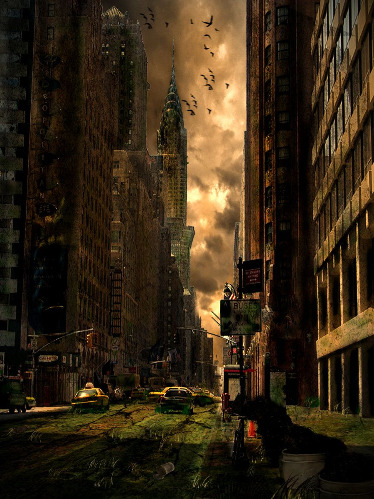 The year is 2067, and zombies lurk around almost every corner, ammunition for guns is normally handmade or scavenged from buildings left from what is now called ‘The Old World’. Averagely, they are fairly stable and some highly fortified, but due to zombies wanting living things so much a lot of the windows have broken.
Throughout the years, four major cities have been established, the first is called Tribuilt capital. It was founded by a man they call ‘Senator’. He is a kind and gentle man who will let anyone into his city under two conditions. Number one: they agree to help expand the city or defend it. Number two: they follow the rules. The second city is called River Stone. The man who runs the city is named Randy Howlbert, he is a gentle soul who would do anything for the people who call his city home, even kill a living person. The third city is called Blood Oath, it was founded by a murderer named Leonardo Grantchester, just before the outbreak he was sentenced to death, but once the walkers came in and took out the guards they left, and as he would put it ‘let him be’. And the fourth is called Utopia, it was the first city to be founded by a man named Jack Reylund, he was a doctor in the ‘old world’ and is the leader of Utopia, it is a major trade root, and known for manufacturing goods.

City Coming of age ceremonies:
Tribuilt Capitol (population: 1,000+):
Tribuilt Capitol's Coming of age ceremony consists of three challenges: 1. Forbidden Leaves: Forbidden Leaves is where the children are put into a large food hall and given a large Valhalla-like feast but the thing is, all but one kind of food is poisonous (survival rate: 5%). 2. Mechanical Genius: This is where the children who survived the first challenge are put into three squads and given a bomb, two of which have an easy disarm button somewhere in the complex wiring, the last needs to be disarmed the old fashioned way (survival rate: 87%). 3. Forrest Run: The children are given a sedative that forces them to blackout, when they wake up they are in groups of three or more around the old world, the ones who survive for three months come home, the ones who die are left out in the wilderness (survival rate: 2% (averagely 100 children survive)
(Current Campion: Mended)
River Stone's Coming of age ceremony has three challenges (population: 1,400+): 1. Boat Master: This consists of two parts, the leader gives you a month to build your own boat with the group, and then two to sail to Utopia and back (survival rate: 95%). 2. Water Breather: River Stone is the Aquatic type city, so in order to prove your skill you have to last five minutes or more underwater, the city gives you three months to train (survival rate: 45%). 3. Controller of the seas: You and the group you are assigned to get six months to sail around the old world (USA part) and kill as many walkers as possible, for each walker you and the group you are assigned to get 1 point for each animal that you bring back fresh 4 points, and for each human killed -5 points (survival rate: 82%)
(current champion: Satans_Evil_Twin)
Blood Oath's Coming of age ceremony has only two parts (population: 6,400+): 1. Full of Carnage: you must prove your loyalty to your city by surviving a battle royal of twenty people for four months (survival rate: 45% (an average of 1,000 kids survive). 2. BloodSeeker: although 'BloodSeeker' as a title has only been given to two people in the forty-nine years of it being a city it is also one of the two challenges, children are sent out to kill forty walkers as a group of four and gather two, two liters of blood each you are given eight months to do this.
(Current Champion: FROSTBITE4395)
Utopia's Coming of age ceremony consists of four challenges (population: 7,000+) : 1. Gear shifter: Prove your skills in mechanics by fixing a source of power around the city, you are given one month to do this (survival rate: 98.5%). 2. Electric Charge: You are given four months to create a battery with enough power to power one of the utopian boats (survival rate: 100%) 3. Gun Slinger: You are given a month to practice four kinds of guns and test your luck with a group of zombies, just hope the guns you trained with are there (Survival rate: 80%). 4. Walkers of hell: You and a group of four others are heavily sedated and transported to buildings of the old world, you are given six months to find the four docking stations, a boat arrives at them every two days, pray the day you find one is the correct one (survival rate: 56%).
(current champion: ALonelyOtaku)

1
I would like everyone to know this is not a first come first serve roleplay.

2
I would like for the people who join this Roleplay to be okay with Mature themes, such as Drugs, Gore (bloodshed, Disfigurement, etc...), and Suicide.

3
this roleplay will have drama and romance, if you are not comfortable with that feel free to Go Away.

4
I would like for everyone to be able to type 1,000 characters or more, and just characters, don't worry, I won't pressure you into 800 words, though that is fine if you would like.

5
I would like for the writers of this roleplay to be Semi-lit to lit.

6
Plot twists are a must, I do love a plot twist, so if you would like to discuss something go ahead and PM me ^^.

7
Joining and Dropping out of the RP is a big N.O. if you are not interested in the RP anymore, or think we could change something PM me and let me know, I'm sure we can figure something out, if not we'll find a way to allow you to exit without you just never responding again.

8
If someone can't respond don't get upset, I can't respond every day, although I will try, so if I or someone disappears for half a second don't bombard us with PMs, wait 3 days at least.

1) Respect the rules of the website.
2) Be respectful to the other roleplayers, you are not the only one on the thread.
3) That's all I got for now, but don't be surprised if I PM you asking for you to change something

FROSTBITE4395   Qrow (kritanta)   102d ago
ℂ𝕠𝕝𝕕𝕖𝕣 𝕋𝕙𝕒𝕟 ℍ𝕖𝕝𝕝 𝕒𝕟𝕕 𝕎𝕠𝕣𝕤𝕖 𝕋𝕙𝕒𝕟 𝔻𝕖𝕒𝕥𝕙
Qrow walked up to the gates of Utopia, they looked like an Asgardian temple, built out of gold with beautiful designs, the rest of the boundary wall was made out of solid stone and lined with gold to keep it together. "[b Utopia, it's even more beautiful than the last time I saw it.]" Qrow thought with a smile, "[b Too bad I'm here on business, I would have loved to stop by a teahouse.]" he mumbled while meeting the guards at the gates, of course, they ignored all of the weapons, but they still searched him for drugs and such. Qrow walked through the city and walked into a twenty-four story company-owned building, it was named 'Consciousness devides' it was very well known seeing as they even had buildings in France. But that wasn't the point, Qrow was there to assassinate the CEO and the CO, that's all. But the way he was supposed to do it was a little unsettling, which was strange because Qrow had little to no emotion, "[b Here we go.]" he mumbled.


Qrow dragged two completely quote on quote 'blended' bodies towards a window on the twenty-fourth story, "[b Forgive me, I'm only doing this for her.]" He pleaded as he tossed both bodies out of the window as if they were skipping stones.