Disclaimer: This will be a one-on-one roleplay. You will be required to
double.

Inspired entirely by The Last Airbender.
This is a
parallel
universe to the actual show. 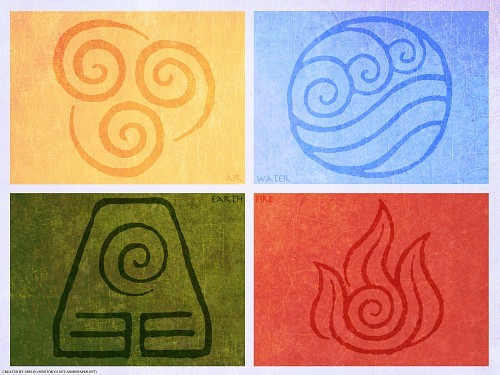 Once, the four nations of Air, Water, Earth, and Fire lived in harmony with one another, until the Fire Nation declared war in an attempt to conquer the world. A century later, there is still no end in sight to the destruction and the world has been plunged into chaos. The legends of the 'Avatar' speak of one who can master all four elements and restore peace and harmony to the world, but there is no sign of this legend being true, and four youths from each of the four nations are determined to restore peace to the world and find the elusive Avatar.

Basically, none of them are aware of each other or that they share the same goal, and tension between the nations is still high. But fate shall pull them together to restore balance to the world. The Avatar may or may not be real in this parallel universe.

The Air Nomads
"The Air Nomads detached themselves from worldly concerns and found peace and freedom."
Air Nomads is the collective term for the monastic order of men and women who practice the discipline of airbending and their seclusive, theocratic society. One of the four major nations, the Air Nomads were wanderers by definition, but had four air temples, one at each corner of the globe, hidden away atop mountain ranges and under cliffs, in the northern Earth Kingdom and on three remote islands. Unlike the other nations, the people of the Air Nomads were, without any seen exception, all benders due to the high level of spirituality of their people

They were the most spiritual of all the cultures and lived in harmony with nature. They also were fun-loving and had a strong sense of humor

The Water Tribe
"The people of the Water Tribe are capable of adapting to many things. They have a deep sense of community and love that holds them together through anything."
The Water Tribe is a collective term for the nation of people who practice the art of waterbending. It is one of the original four nations and its citizens primarily inhabit the northern and southernmost regions of the globe, near both poles. Many people of Water Tribe ethnicity also live in the United Republic and there is a small community of waterbenders that populate the Foggy Swamp in the Earth Kingdom, although they were isolated from their sister tribes for generations and others were largely unaware of their existence.

The people of the Water Tribe are generally peaceful, and strive to live in harmony with nature and the other nations of the world.

"The people of the Earth Kingdom are diverse and strong. They are persistent and enduring."
The Earth Kingdom is one of the world's four nations. Spanning an entire continent as well as several subsidiary islands, it is the largest and most populated sovereignty in the world and encompasses much of the eastern hemisphere. The kingdom operates as a monarchy under the rule of a king or queen, although the 54th Earth King, Wu of the Hou-Ting Dynasty, announced his intention in 174 AG to abdicate the throne in favor of splitting the nation into independent states with democratically elected leaders, akin to the political system used in the United Republic of Nations.

The people of the Earth Kingdom are proud and strong and adhere to a philosophy of peaceful coexistence and cooperation with the other nations of the world.

The people of the Fire Nation are strong-willed, fierce, passionate, and driven. They will stop at nothing to get what they want and nothing will get in their way.

Strictly 18+.
This roleplay will potentially be following heavy, mature, possibly triggering themes.
Romance is completely allowed and almost encouraged.
I don't care about sexualities or pairings (and I can play as any gender); all sexualities are fair game, just let me know if you have a specific preference.

Illustrations or real-life photographs can be used, I don't have a specific preference.
Please use images that accurately represent what nation your character comes from.
For reference, The Water Tribe is based on Inuit, Yupik, and Sirenik Eskimos cultures; the Fire Nation on Imperial Japan with Chinese and Korean cultural influences; the Air Nomads on the Tibetan culture, Buddhism and Hinduism; and the Earth Kingdom on Imperial China with Korean cultural influences.

Plot discussion and further planning will be required. I'd like for you to be
active
in planning and plot discussions.
-----
Please make sure you have read everything before sending me a PM.
Please also specify which nation your character(s) are from and a very small, basic skeleton with an image included.