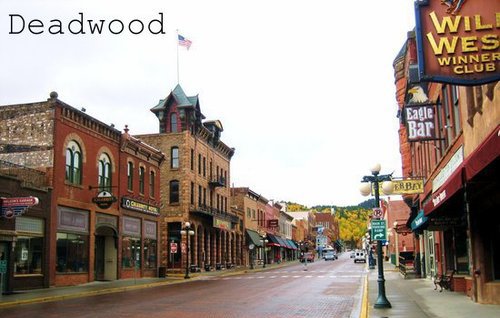 2016 Deadwood, South Dakota. Population: 1,263
25th January started out as a normal day for most of the people in this small city. Men and women went about their daily routines, clocking in at work or going to school…normal things on a normal day.
However, it was not a normal day. No one could have been prepared for what was to come that evening. John Roberts planned on making a name for himself and he was not going to let anyone forget the 25th January. That evening he looked over his plans one last time, checking for every last detail to make sure that he could pull off his plan without too much interference. His target: Gold Dust Casino and Hotel. It was the perfect place really. Many of the residents of Deadwood spent their Friday nights drowning in liquor and emptying their pockets so there would be plenty of people there but with it being such a small city, security was not exactly as tight as it should have been. He would be able to get a gun in there without any problems.
That night, at 10pm sharp he walked straight into the bathroom stalls and looked at himself in the mirror, smiling to himself as though he was about to commit a grand act of righteousness, when really it was a massacre that he was about to ensure. He reached into his bag and pulled out his assault rifle and pulled on the ski mask and took one last look at his reflection. It would be the last time he would see it. At that moment he walked out of the bathroom and unleashed his weapon upon innocent employees and customers.
John Roberts, age 22 was shot dead by officers at 10:28pm this evening. Final deaths and casualties are not yet known but we can confirm that 23 have been found dead and 102 have been injured or are in critical condition.
Deadwood would never forget the name.

We are the survivors, the family of the murderer, the officers who attended the scene on that terrible night. It is now 2022 but the city has not forgotten and many have not moved on. Whoever you are, you have a story to tell. What is your story?
Were you a survivor? Were you an officer? Are you related to the murderer? Did you lose someone special? Were you simply a person who switched on the TV to hear about such a horror?
I have a very specific plot in mind for this. One that I will introduce through my two characters but I want people to pad out this story. If you are interested, please message me. I haven’t got a skeleton for you to complete because I want your characters to develop throughout the RP but I want to know who you are planning on playing before we start. My two characters will be introduced through an introduction post. One is a survivor, the first to call 911. The other is a mystery…for now...the introduction posts will give some indication about the plot too!
Action
Thriller
Video Chat
Kumospace [Everyone]
Gather.town [Everyone]

d1gn17y   :Mystery:   15d ago
[b “You were a failure.”] The cold female voice filled the silence of the empty room. It was void of what you would usually expect of an office. There was no comfort here, only a wooden chair and an old desk. The walls were completely covered with photographs, newspaper clippings and police information. How she had managed to obtain such information would remain a fact only she would know for the time being. There was not even a single inch of the wall that remained bare to the original baby pink paint that had once been her chosen colour for the room. It had served as a bedroom once. She had always detested the colour but she needed to appear as a normal teenage girl and she had chosen the colour to blend in.

The woman held the picture of John Roberts in her left hand. Her face contorted with disdain for the man. She breathed in and then spat out saliva onto the image so that it distorted his features. The photo fell from her hand then, landing on the desk before her. She had once held so much love for John but now all she felt was disappointment and...hate...she had always felt hate for human life but never for John. It was strange how quickly that had changed after that fateful night in January 2016. After all, he had betrayed her. Not because of what he did, but because of when he did it...how he did it. How could he have betrayed her in the way he did? Had she not been good to him for the time they had been together?

Her eyes flickered from the photograph to those upon the wall of the office. Looking each of the victims in the eye as she scanned them. Some had a red cross through them, others were yet to be crossed. Who were all of these people? The ones who should have died that night. The ones who had survived when there should have been no survivors. It was her job to clean up his mess now. Do what he should have done six years ago.

The people who had been crossed out were survivors who had died shortly after the attack, mostly from their injuries, some from suicide and depression. It was cowardly really, at least in her mind it was cowardly, but it just meant that they had started her mission for her.

Six years of planning and she was ready to finally kick it into motion. A sickening smile appeared upon her face as she pulled down the photograph of her first target. This one would be an easy kill. He had no family and had pretty much drowned himself in alcohol ever since he walked out of the massacre alive. She could even make this one look like a suicide or an accident by a stupid alcoholic who was too drunk to know what he was doing. The woman smirked to herself and laughed in the most disturbing of ways as she formulated the plan in her mind. It would take a few weeks and she would spend some time learning his routine but before the month was out, he would be dead.

There were many words that had been used to describe Willow Miller since the 25th January 2016. Many words. Yet she did not feel as though any of them had come close to describing her. Coward. Deserter. They were closer to the words that she would have used if she had ever been tasked with describing herself. Even six years later, after the rush of articles and requests for interviews she still could not see what others did.

The fact was, her actions had saved the lives of hundreds of people. If she hadn’t remained hidden and barricaded in the woman’s bathroom, there was every chance that she would not have had chance to put in the call to the emergency services. There was every chance that she might have been killed along with everyone else in that casino. Yet, all she could think about was how she had curled herself up in a bathroom stall and cried while she heard the screams and gunshots, while her friends had been taken from this world.

[b “It should have been me.”] The words seemed to echo in her mind even after she voiced them, looking in the mirror at the gaunt figure that looked back at her. There was no doubt that Willow had once been a beautiful woman but even after years of therapy, she still dreamt of that night as though it had happened only yesterday; she still struggled to eat a full meal without feeling sick at the thought of what John Roberts had done. A beautiful woman, with a beautiful life. She wanted nothing more than to get that back, but a part of her knew that it was lost forever, that she would never be the same person.

Not even her parents could convince her that she was blameless in this. Perhaps one day there would be a person who could walk into her life and change all of that, but she would need to let people into her life for that to happen. So, to avoid human contact, Willow Miller threw herself into her art. She had left Deadwood to attend the Maryland Institute College of Art. She had graduated the top of her class, mostly because she avoided social interaction with most and focused on her studies, far more than she would have if she would have been attending college in New York with her best friends like she had planned. Those plans had been put to death the night John Roberts stole them for her world.

She had put on her lost weight during her time at college and while she remained in Maryland to explore her art further she almost seemed to forget…but she could never truly forget. Especially now that it was time to return home to Deadwood. She had stopped eating and sleeping over the last couple of days but she couldn’t run forever, at least that was what her parents were telling her. She needed to face what she had been avoiding all these years and now that she was staring at herself in the mirror of the bathroom she would never see again, she was wondering whether this would be another occasion where she curled herself up in ball and tried to shut out the world. Now was the time to be brave if she was ever going to have a normal life.

She wanted to be able to feature her art in studios, have people compliment her on the work she had completed and be able to accept the compliments without feeling guilty for being alive in the first place. Returning home was the first step. So, she took a deep breath, left the bathroom and picked up the keys to her car and set about driving back to Deadwood.